You probably don’t think too much about all those accessories and appliances which run off electricity in your household – that is, unless you’ve had your power knocked out for any period of time and been left without any power whatsoever. All kinds of electrical disasters related to power surges are possible, and if you should experience a power surge at your home, it’s entirely possible that some of your own appliances could be fried and damaged beyond repair. 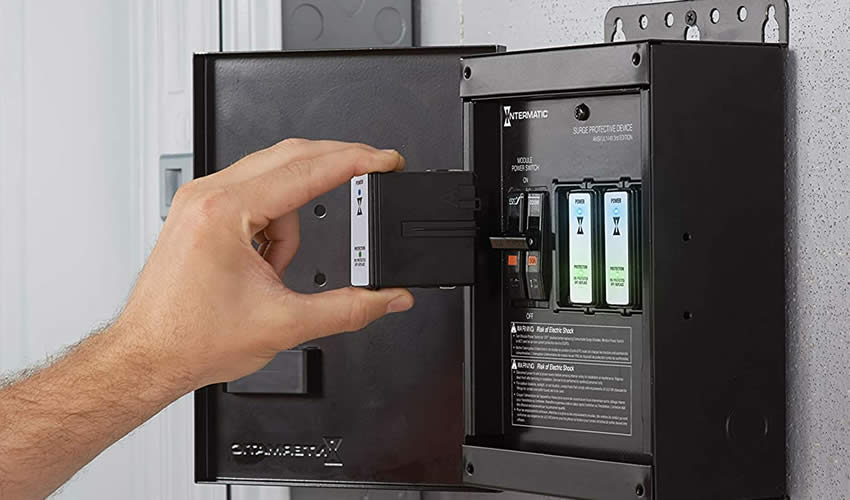 You could lose your heating and cooling systems, your hot water heater, and even a substantial part of your electrical wiring. In just the moment that it takes for a search to overwhelm your electrical system, you could be left without any power and without any appliances. You can avoid all this by having a home surge protector installed by our skilled professionals at Modern Wiring. We service a broad area in Washington state, including the communities of Graham, Kent, Orting, Puyallup, Fredrickson, South Hill Puyallup, and Tacoma. Call us with any inquiries you might have about home surge protectors.

What exactly are power surges?

Power surges happen when excess voltage is sustained by any of your electrical components and when this excess voltage remains in effect for longer than 10 milliseconds. A power surge will generally cause an increase in the flow of electricity by as little as five volts, or as much as thousands of volts, depending on the actual cause of the power surge.
When there is a major change in the electrical flow, that's when some of your electrical appliances can be completely fried, and your fuses can be blown. It's very common for power surges to negatively impact heating and cooling systems, residential security systems, televisions, computers, telephones, laser printers, fax machines, and all the kitchen appliances such as dishwashers, microwaves, refrigerators, washers, and dryers. Even smaller electrical devices such as hairdryers, electric razors, and electronic tools can be negatively impacted by power surges.

How power surges are caused

Protect yourself from surges

You won't have to worry about either internal power surges or external surges when you have a surge protector installed at your home. Contact us at Modern Wiring, so we can provide this kind of protection for your home and ensure that your appliances and your electrical wiring remain intact, even in the event of a significant power surge.

Get a Surge Protection estimate.

Modern Wiring can help you select the right size panel for your home.

Modern Wiring, you'll be enjoying your new light fixture in no time

No project is too big or too small for our electricians. We are fully licensed, bonded, and insured. In addition, we employ professional, certified electricians, not just technicians, to handle all of your electrical repair and installation needs.

Back to top
Page load link